The taxi regulatory paradigm is under siege from formidable forces and is unlikely to survive in its traditional form. Sharing or the use of part-time assets and labour has triggered a massive shift in the patterns of participation, resource use, values, income and risks. Regulators and the industry face the challenge of managing a landscape characterised by evaporating boundaries, fragmentation, uncertainty, fare volatility, multiple roles, many-to-many relationships, transience and rising costs.

Hence, there is a need to evolve a new regulatory paradigm for the taxi industry. In my view, the new paradigm needs to be consistent with the theme of an information society. Hence, the new paradigm should aim to remove information constraints and to enhance the ability of drivers to self-organise. In tandem with this, I propose a shift from the current firm-centric regulatory paradigm to one based on modular regulation.

There are several forces underpinning the shift to modular regulation.

It is evident that the traditional regulatory regime is indefensible because the traditional demarcations defining vehicles which can be used as taxis, individuals who could be drivers, services which would be considered as taxis and the setting of fares have been rendered inoperable in the sharing economy. There will be difficulty in focusing regulation at the firm level due to the growing complexity of business models.

In this regard, the taxi industry, unlike the airline or other industries, is a suitable candidate for self-organisation as the industry is local and is built around individual cars and drivers. This highlights the point that unlocking benefits from the sharing economy requires the reorganisation of the regulatory and commercial structures and processes.

Centralised administration can be cost-efficiently replaced by technology. Nikolaus Lang, Michael Rüßmann, Jeffrey Chua and Xanthi Doubara advocate “a digital mobility platform that aggregates all transportation modes should be at the heart of the new urban mobility ecosystem…an integrated mobility platform to help a city manage traffic volume and flows while at the same time offering consumers a single easy-to-use point of access to the city’s transportation network. Boston envisions just such a platform, which consumers will be able to use to plan and book trips, accessing it through a device such as a smartphone and receiving real-time information about delays and transportation alternatives. The system will manage payments centrally.” 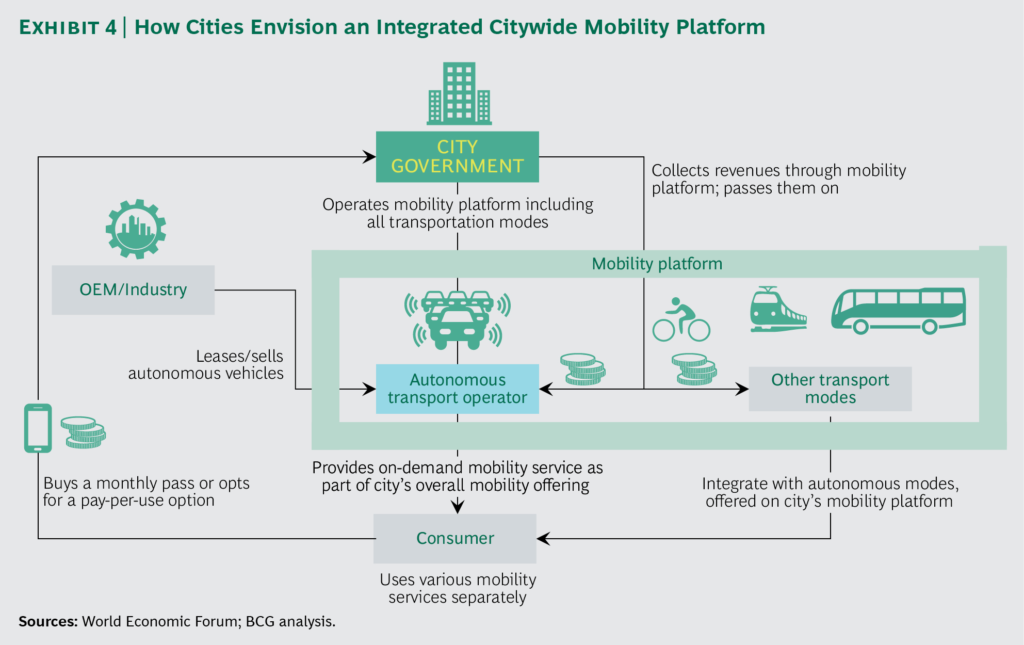 The futuristic scenario of modular regulation will bring us closer to the sharing ideal that the drivers are individual entrepreneurs. In my view, a modular regulation paradigm would unbundle registration, maintenance, insurance and information from firms; shift regulatory oversight from manual processes to be based on crowd feedback, information transparency and audit trails; and address demand-supply imbalances through information-based bargaining processes. Note that the shift from firm-based paradigms to modular regulation relieves worries about boundaries demarcating jurisdictions and services and license value, profits and income.

Hence, the key objective of modular regulation should be to enhance self-organisation and to improve the welfare of drivers or customers. The ability of drivers to self-organise would reduce intermediation costs which would imply either higher income for drivers or lower fares for passengers. The rules should be tweaked to ensure a competitive environment that offers reasonable income, better service and coverage. The appropriate business models should be allowed to evolve based on the rules on drivers and cars.

There will be very little support for modular regulation from commercial firms. This is because it takes away control of information and registration from firms and passes it to drivers. Once drivers have a regulatory process and an app that provides them the most capabilities at the lowest possible costs, the bargaining power of drivers will improve relative to firms. Firms would then need to figure how to add value and they can compete by offering better terms to recruit drivers.

But regulators may also be uncomfortable with the self-organising process. First, they may not have the tolerance for the chaotic industry conditions which will be dictated by supply shifts (given demand is relatively inelastic). They will be reluctant to abandon a familiar model of restrictions that resulted in long-term commitment and stable (inflexible) supply.

In the traditional model, regulators could lean on taxi firms to expand capacity while providing them the laxity to hire cheap migrant labour and third-party use of vehicles to overcome driver shortages. Under the self-organising scenario, regulatory control is diminished by the fluidity of the many-to-many relationships. As a result, regulators won’t be able to lean on firms like before to impose discipline and coordination while agency resources will get limited by funding shortfalls. But the public would still expect regulators to intervene when things go wrong.

Hence, regulators need to change their approach and learn how to rely on information and transparency rather than firms to solve problems. In this regard, virtual activities are different from physical activities in that the information content is significantly higher. They are much easier to monitor. there is an audit trail and the necessary interventions can be shaped to influenced behavioural norms. Hence, regulation by decree (entry and fare regulation) is appropriate in a low-information environment where information asymmetry is prevalent. But this does not hold in a high-information environment.

Overall, we are unlikely to want to move back to a low information environment. I cannot imagine that we will try to arrange a taxi without the convenience of information – such as pick-up time, fare and driver’s identity and more. Sharing is already providing its ability to new ways to participate in economic activities. This will undermine the old ways. This is the real test of the sharing economy – the extent to which self-organising can be enabled to complement markets and governments in coordinating economic activities. Hence, governments will need to figure out their role and policies in managing information as this will have a tremendous impact on how people, assets and activities are connected. In particular, governments will need to pay greater attention to optimising social value and figure how to carefully balance this when it comes into conflict with the private pursuit of profits.

[4] Part-time drivers may not want their employers to know they are moonlighting as taxi drivers. Firms may want the flexibility to use unregistered immigrants to drive their taxis or they may be concerned that others may poach their drivers.

I was formerly a securities regulator and equities analyst. I started writing these articles (and a book) because I felt that there were a lot of economic theories that didn’t seem to match up to the realities we are facing. This also means that a lot of policies (based on these theories) are wrong. So I’ve tried to make sense of how things worked based on the paradigm of an information society. Its a challenging topic and difficult to pin down. This means I have had to explore issues over a wide range of policy areas. Over the next few months, I will cover the service economy, the sharing economy, household and work structures before moving onto policy issues on the anorexic economy (role of corporates, basic income, housing affordability) and the financialisation process (capital, monetary policy, securities regulation).